If you know me, you would know that I’m passionate about French bulldogs. Something about those squish faces, bat ears, and little corkscrew tails just makes my heart pitter-patter. I loved Frenchies long before I owned one, so I had lots of time to research and decide if this breed was right for me. <PS- it is. I don’t think I’ll ever not own a Frenchie in my lifetime.>

If you know me, you would also know that I didn’t find out the gender of either of my children while I was pregnant, because there are so few pleasant surprises in life. The third biggest good surprise of my life was when Jensen had a Frenchie waiting for me when I got into town to visit him. I literally collapsed into tears, and some days, I still look at this dog- nearly seven years later- and can’t believe I get to have a Frenchie, this Frenchie, in my life.

Kermit has been one of the greatest gifts I have ever been given, but he has been labor intensive… a lot like a child. I’ve noticed that my Instagram posts about Kermit tend to get a lot of attention, and that doesn’t surprise me, because he’s pretty cute. Because of this, I thought I would share my Frenchie experience so that anyone considering the breed has a little more information available from an owner.

Please bear in mind, I’m not a breeder, just an avid enthusiast, and I’ve been lucky that Kermit has been relatively healthy, though we have had a few hiccups.

SO… what to expect when you have a French bulldog:

Kermit snores like a man. Worse than a man. He also sleeps with us. (Jensen fought this battle, and he didn’t win. See post #7). This is due to the fact that they are brachycephalic- their nose is too short. This causes a whole host of other potential issues (see #7,again)  but be prepared to deal with a dog who will saw logs whenever they sleep. He also makes weird noises just because. It’s a Frenchie thing.

2. They have bad gas

This can be alleviated by diet- we do a grain free food and saw a big improvement- but when I say they have bad gas, I mean clear the room bad.

This is the biggest issue we’ve had with Kermit, and he’s on a daily medication to minimize the problem (Apoquel, if you were wondering- about $35/month for his prescription). I’m pretty confident he has a grass allergy, although this hasn’t been confirmed by a blood panel. Before we put him on medications, he used to lick his paws incessantly. Allergies are a really common problem for this breed, so you’ll probably be locked into doing some kind of method to deal with it. Medications work for us, some people can get away with wiping down paws. I’ve seen Frenchies with severe skin allergies all over their bodies, so there’s definitely a range of severity.

This will make your life harder with any kind of training- house breaking, leash training. We actually have a harness for Kermit because he pulls so strongly at times, and I don’t want to damage his wind pipe. I know people do agility with Frenchies (and it’s really cute!) but sometimes the dogs won’t cooperate. It’s just something to expect.

Kermit is sitting with me as I write this… and it makes me kind of emotional to think about how much this dog loves me and how much joy he brings to my life. Yea, he smells, and he’s loud, and obnoxious- and he has some bizarre neuroses- but if I’m having a bad day, he’s always down to cuddle, especially as he’s gotten older. Kermit has comforted me through some really hard stuff, and I dread the day when I have to watch him leave this life. He’ll leave a big, big hole in my heart.

He’s a little bit of a stalker…

6. People will think you own a pug or a Boston terrier

It’s annoying, but it happens.

7. They sink in water

It’s true. While there are a few Frenchies who can swim (check YouTube!), mine cannot. Thankfully, they make hilarious dog life jackets, and he loves wearing it. 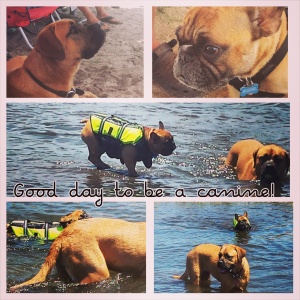 This is a picture from a day we spent at the lake. Kermit loved his lifejacket!

8. They overheat and chill easily

Because of that shortened nose, and also because of their compact body size which doesn’t allow for adequate cooling, Frenchies overheat easily. This doesn’t mean that you can’t have one if you live in a hot (or cold) climate, you just have to take some preventative measures to keep your dog comfortable. I’m an expert at dealing with the heat problem, so I’ll share some things I learned:

9. Be wary of trend colors

I’m probably going to offend someone, but I don’t care- I studied animal science and biology in college, and I have to say this. The trend colors some Frenchie breeders are pursuing worry me. It’s not breed standard, and I’m not sure what kind of breeding practices they’re doing to get those colors. I read the AKC standard before I got my dog, so I knew what to look for and what not to. If you want one of the off-standard colors, be aware you might get more than what you bargained for.

10. They will run your life

And I don’t regret it, one bit.

Maybe you’re not in the market for a puppy- I completely understand! Kermit was a terror when he was a puppy. I’m dead serious, he was awful. I cannot recommend the French Bulldog Rescue Network enough! They are a very responsible rescue with dogs located throughout the country, and they always have middle aged and senior dogs who need a good home. They’re also always looking for financial support. Sometimes they get rescue dogs with some dire health issues, and they get these dogs healthy before the adopt them out- sometimes to the tune of thousands and thousands of dollars. They do it because they love the breed, and I think they are a great organization.

People gave me flak for neutering my dog because he was pretty expensive- they thought I should stud him out to make money! No. Way. I’m not going to breed a dog just because of the cost. There are so many dogs- even Frenchies- who need loving homes, and I didn’t want contribute to overpopulation. In addition, it also helps your dog lead a healthier, much less stressful life.

I think this is the longest post I have written to date- obviously this is a passionate subject for me. ❤ If you have any questions, drop a comment below or comment on my Instagram , and I’ll be happy to have a dialogue with you. Frenchie owners, think I missed anything? Let me know!